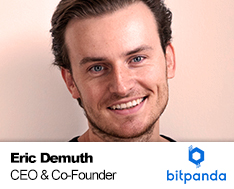 Eric Demuth (twitter.com/eric_demuth ) is an entrepreneur with an eSports background. Whilst being active in the financial industry in London and Vienna since 2009, he also founded his first company. Frustrated by how hard it was to buy and sell cryptocurrencies like Bitcoin, he co-founded Bitpanda. Before all this, he travelled the world on HapagLloyd container ships while working as a ship’s mechanic, followed by economics studies at the WU Wien and London School of Economics & Political Science. Eric actively shapes the world-wide crypto community as opinion leader in several fields